Smith Teamaker’s No. 3 Shu Cha Pu-erh has been transforming customers into devotees of its robust, easy-drinking flavor profile for years. Due to its popularity, our Head Teamaker, Ravi Kroesen, returned to origin on a mission to discover more first-class pu-erh teas in the lush, subtropical mountains of Yunnan Province. In what follows, we’ll tell you about Kroesen’s escapades, the history of pu-erh itself, and the exciting rare teas he brought back for our pu-erh lovers, which are sure to satisfy aficionados and novices alike.

Our founder Steven Smith often emphasized that all tea, whether green, white, black or oolong, all comes from a very special species of evergreen shrub: camellia sinensis. Pu-erh teas are no different. However, pu-erh, unlike most teas, is fermented. There are two kinds of pu-erh: ripe and raw: ripe pu-erhs are force-fermented with moisture and yeast, whereas raw pu-erhs are designed to ferment naturally over time, like wine in a cask. Traditionally, pu-erh is made using a camellia sinensis assamica leaf that is first processed like a green tea, then compressed into a dense form (like a “brick” or a “puck”) using heat, steam, and a steel or stone tea-mould. Today, loose leaf pu-erhs (like our No. 3 Shu Cha Pu-erh) are also widely available.

Thanks to Kroesen’s discerning palate, and his ability to establish relationships with the tea-world's finest craftspeople, we are releasing two new pu-erh cakes this month, sourced directly from highly regarded gardens in Yunnan Province. One cake, our No. 77 Bulang Sheng Pu-erh, is a raw pu-erh, produced using hand selected tea-leaves from the ancient tea gardens of the Bulang Mountain Range in Menghai County, China. Its exquisite tasting profile evokes vanilla, tobacco, wildflowers, and fresh hay. The other cake, our No. 78 Wuliang Shou Pu-erh, is a ripe pu-erh made from tea leaves grown in Wuliang county, China, with full-bodied flavors of chocolate, malt, and earth tannins.

Let’s Start With a Little Bit of History

“Pu’er” is in fact the name of a prefecture-level city in Yunnan Province in southwest China. “There are ancient tea trees in Yunnan of an indeterminable age, that were individually propagated using Assamica seeds,” says Kroesen. Sharing a border with Laos, Myanmar, and Vietnam, Yunnan Province is a longstanding hub of intersecting trade routes and caravans. 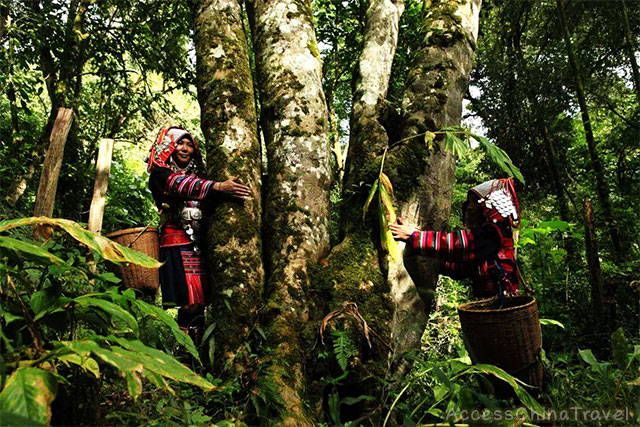 Compact cakes and disks of tea leaves grown in Yunnan were originally manufactured so that the material could be more easily packaged and transported from China to Tibet, where it was historically traded for Tibetan horses. Due to temperature changes and the abundance of moisture in the hazy mountain air, the densely packaged tea leaves would often undergo a natural process of fermentation during transit. Fermentation cut the tea’s notorious astringency (bitterness) and gave it a mellower, maltier, and sweeter taste, which in turn became highly desirable to Tibetan tea drinkers. To help distinguish their distinctive quality and flavor on the open market, the city’s name (Pu’er) was eventually attached to the teas it was exporting.

In Chinese medicine, pu-erh is frequently prescribed to treat high-cholesterol and blood pressure, and is often served with fatty foods like Dim Sum. In the mid to late 2000s, the popularity of pu-erh teas in China surged. For some time, demand exceeded supply, creating a market bubble (which eventually popped). On occasion, pu-erh has been valued at a higher price per gram than silver.

High quality pu-erh cakes become more desirable, and subsequently more valuable, as they age. “In China,” Kroesen remarks, “it’s thought that if you invest in pu-erh, it will pay off 10 or 20 years later.” After the pu-erh market bubble popped, an infamous counterfeit market broke out. Disguised with counterfeit packaging, low-quality pu-erhs were marketed by black-market dealers as high-quality aged pu-erhs from esteemed farmers and brands. “To this day, when I’m seeking out pu-erhs at origin, I have to find reliable, principled vendors, and trust my gut when I get a good feeling about somebody and the tea they’re offering,” says Kroesen.

High-quality pu-erh teas are often produced in small-batches by renowned local farmers in extremely rural areas, which often lack paved roads. “Since Yunnan experiences erratic torrential rains almost year-round, I’ve been stuck on precarious mountain roads during my visits to these local farms,” says Kroesen. “Unlike most of China, Yunnan is not Han ethnicity dominated. The area is populated by diverse tribal communities with very unique customs. I’ve been served some remarkable delicacies in Yunnan, like a roasted hornet larvae the size of my thumb. I have an allergy to bee stings, and the nearest hospital was probably 12 hours away, so I decided not to eat the larvae. But I also didn’t want to be rude to my guests, so I pretended to eat it in one bite and surreptitiously fed it to the farmer’s chicken,” says Kroesen, grinning.

Pu-erh is molded into several shapes, including “mushroom” and “bird’s nest” shapes, which can vary substantially in size. However, Kroesen says, “most pu-erh shapes are just fun novelties often made using lower quality tea. The highest quality teas are almost always pressed into circular cakes or rectangular bricks. 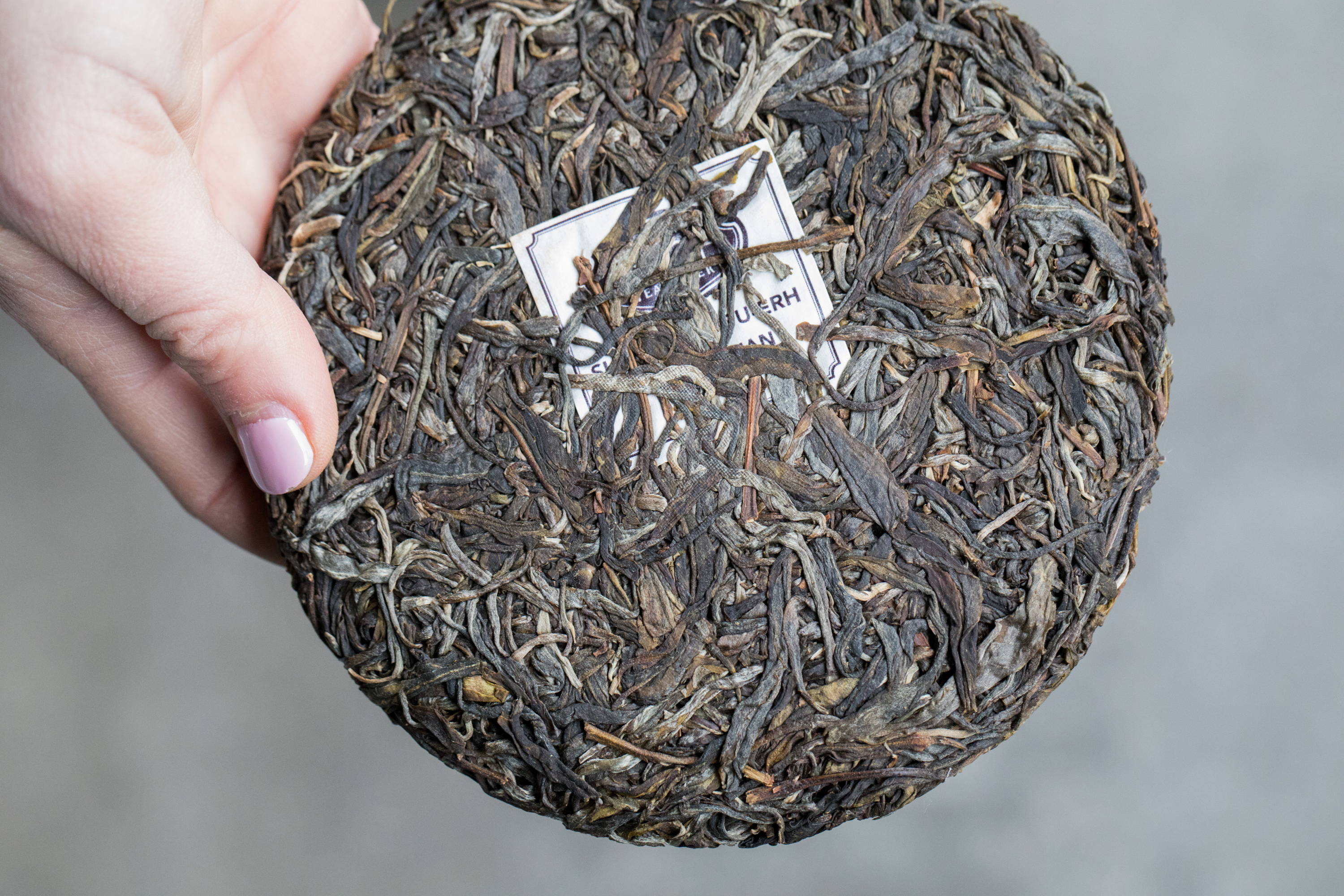 As we mentioned above, there are two main kinds of pu-erh: raw and ripe. Let’s delve a little deeper into the difference between these types.

Getting the most out of your pu-erh steeping experience.

Kroesen recommends using a Gaiwan (translating to small lidded bowl) exclusively when steeping raw pu-erh teas. If you’re unfamiliar with the Gaiwan steeping process, just click here. To steep your raw pu-erh in a gaiwan, simply dislodge 7-10 grams of leaves from the cake for every 6 ounces of boiled water. A favorite amongst Teamakers, the gaiwan allows you to enjoy five to ten sequential “flash” steepings (steepings at intervals of 15-40 seconds) of a single dose of tea leaves. With each steeping or “extraction,” the tea leaves will release different gradations or waves of flavor, creating a multi-dimensional, highly dynamic drinking experience, that can easily be shared amongst friends. Typically, pu-erh teas are more forgiving than green or black teas when oversteeped, so entry-level pu-erh cakes like our new No. 78 Wuliang Shou Pu-erh are a great starting point for new gaiwan users. 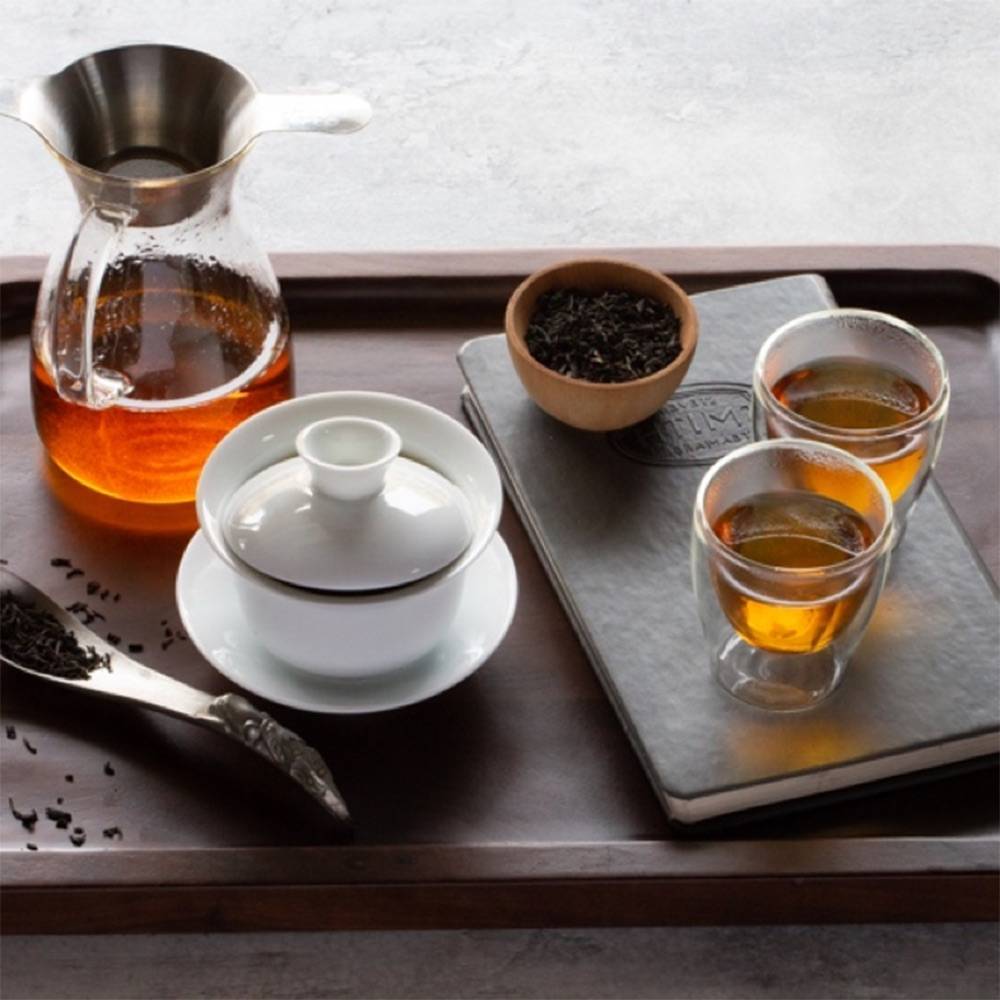 In some parts of China, acquiring a good pu-erh is akin to investing in a particularly excellent vintage of wine––it only becomes more delectable and valuable over time. In China, it is customary to give a raw pu-erh cake to a couple when they have a child. The parents then age the cake until the child’s 18th birthday, cupping it for the first time during the birthday celebration. Consider buying a cake of our new No. 77 Bulang Sheng Pu-erh for a new parent in your life. Your gift will surely stand-out at the babyshower. And who knows, perhaps the recipients will invite you over eighteen years later for a truly uncommon cup of tea.

This year, the specialists in our tea lab also experimented with pairing our No. 3 Shu Cha Pu-erh with other, complimentary blending ingredients. Last summer, we released an especially singular blend called No. 95 Chocolate Peppermint Pu-erh, a decadent aperitif which combines our No. 3 Shu Cha Pu-erh with chocolatey Pacific Northwest peppermint leaves, rich cocoa nibs and zesty dried orange peels, yielding a creamy mouthfeel and an exquisite finish. No. 95 has been lauded by customers and fellow Teamakers alike as the perfect bookend to any meal. What’s more, by following just a few simple steps, our No. 95 Chocolate Peppermint Pu-erh can be used to make a heavenly zero-proof malted milk mocktail, ideal for reveling by a winter fire or quenching your summer thirst.