The morning traffic inched through Hangzhou along the elevated freeway.

Looking out from the backseat at the endless river of cars on the road in front of us, I exclaimed, “Rush hour traffic is crazy here!”

“Not rush hour,” my host Will replied, turning around and smiling, “It is Sunday.”

Will was not my host’s real name, rather an adopted name which was common practice for Chinese working with Westerners; to take a name that could be easily remembered and not butchered in its pronunciation and tone.   Fei was his real name and you used the first tone in Mandarin Chinese on the “e” to say it correctly. He was recently married and had just moved into an apartment with his wife near a trendy strip of bars, which although he did not frequent, made for some interesting stories in what he saw while passing by in the evening.

It was the end of my second week in China and the start to my fifth of six total stops during the trip and my grasp on the order of days was beginning to fray.

Damn, I thought. This country never ceases to amaze me.

We were stuck in the middle of traffic that would put the worst of any of American city’s traffic to shame and it was just another ordinary Sunday. After an hour more of our impromptu slow-moving elevated tour of Northwest Hangzhou, we finally broke free into the countryside towards Yuhang and Jing Shan Temple, where a moment in tea’s history was said to have taken place.

Like cheese, beer and wine in the West, for much of tea’s history, monks were often attributed as being the best caretakers and innovators. Now I was being brought to Jing Shan Temple where I was told tea had been cultivated for the last 1,200 years, and the processing style for the green tea being made there had remained the same for over 500 years. 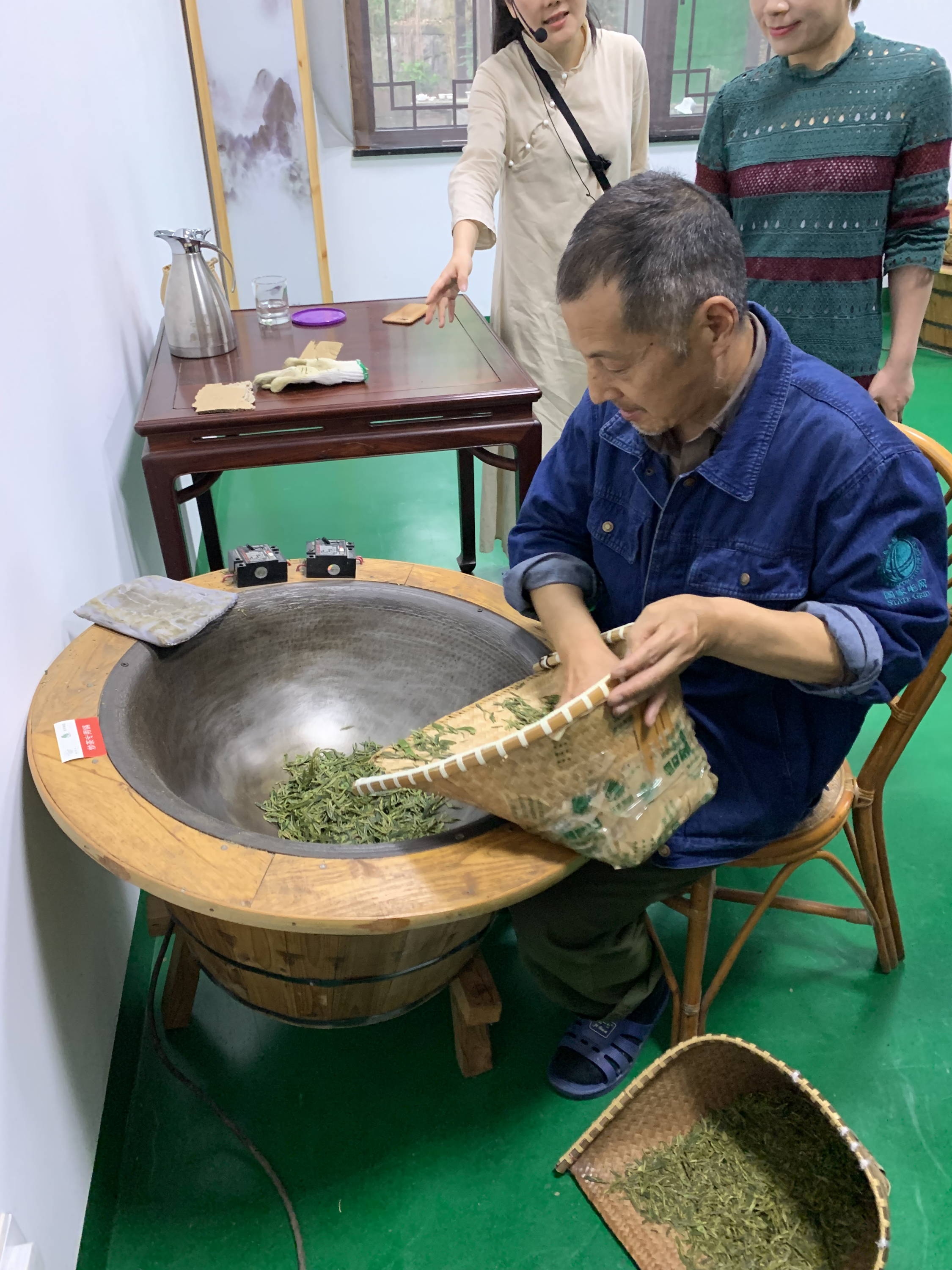 “So, we’re going to have tea with one of the senior monks at the temple?” I asked, wanting to confirm the brief conversation I had with Will the night before.

“Yes,” Will replied. “Jing Shan is a popular tourist destination, so we are lucky that we will be able to spend a little time with him.” He paused before adding, “This is also where Matcha used to be made.”

“Oh, really?” I said, sitting up a little straighter, my interest in this temple increasing. “Are we going to be drinking Matcha?”

“Do they still make Matcha at Jing Shan?”

“Not really. Only for tourists.”

The search for authenticity in China can be tricky. Despite the tradition of tea in China spanning thousands of years, so much of its current tea culture was recently created. An area which still made powdered green tea in China would be worth trying, however, I wasn’t interested in an experience purely created for tourists.

“Oh.” I replied. “Thanks, but no thanks.” Deflated, I sunk in to my seat and looked back out the window.

Driving deeper into the countryside, we passed through smaller and smaller villages, each village a collection of older traditional brick and wood homes or newer concrete constructions, symbolizing a family’s ascension into the modern Chinese middle class. All homes regardless of age, had red banners on the outside of their doorways with different sayings to conjure prosperity, long life and good luck.

Soon we were ascending into the foothills towards Jing Shan, where the new road shed it markings and began to narrow to a point making it difficult for cars to pass each other at times, let alone the numerous mini buses that were carting tourists to and from the temple. Occasional glimpses of tea fields on opposing mountains came into view as we rounded bends and headed towards the peak.

Summiting the mountain, we descended into a small valley lined with rows of tea fields at the end of which was the entrance into the Jing Shan Temple grounds. Parking next to the gift shop, we were quickly met by our guide, an assistant to the head monk and a friend of Will’s. 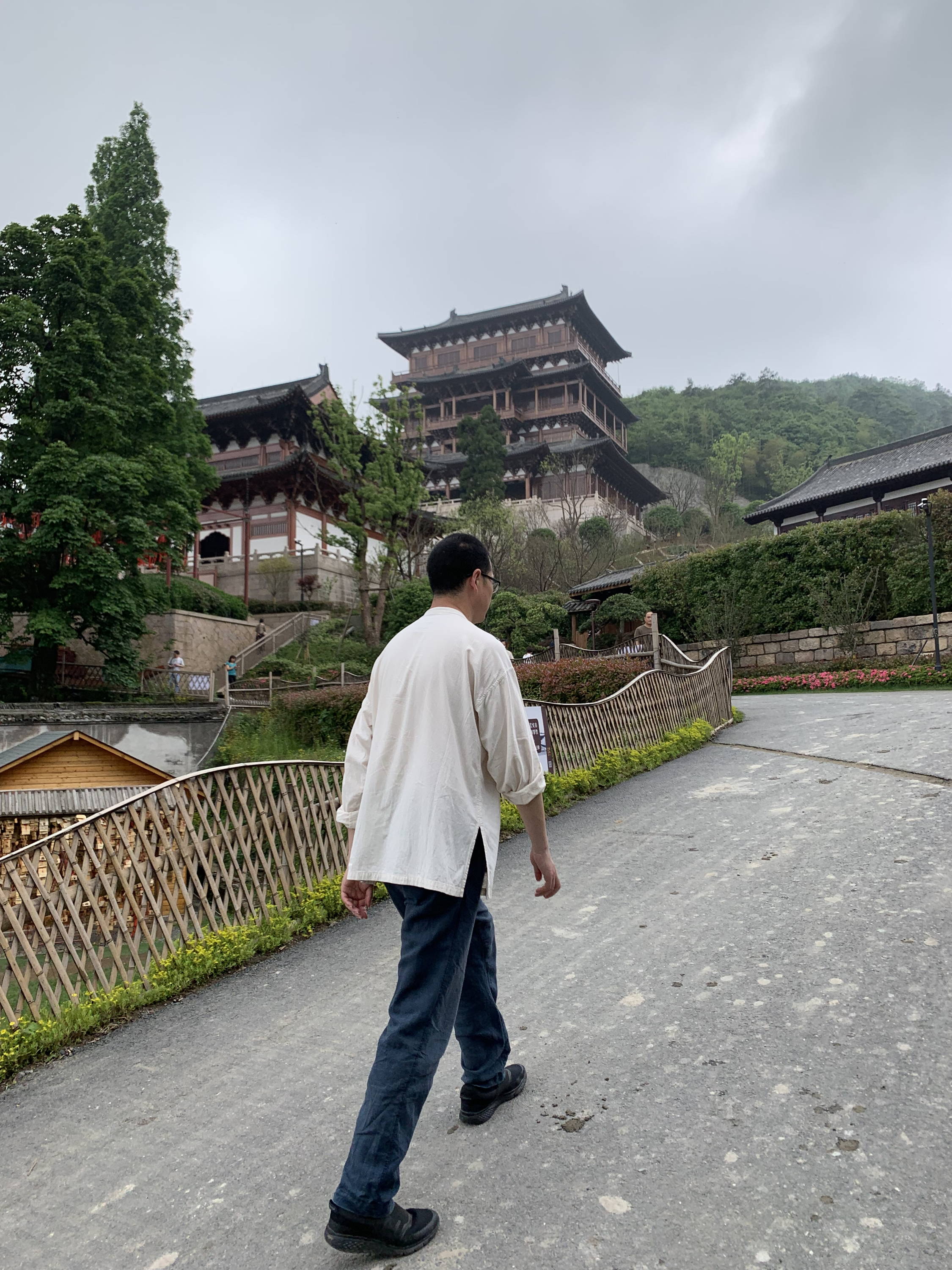 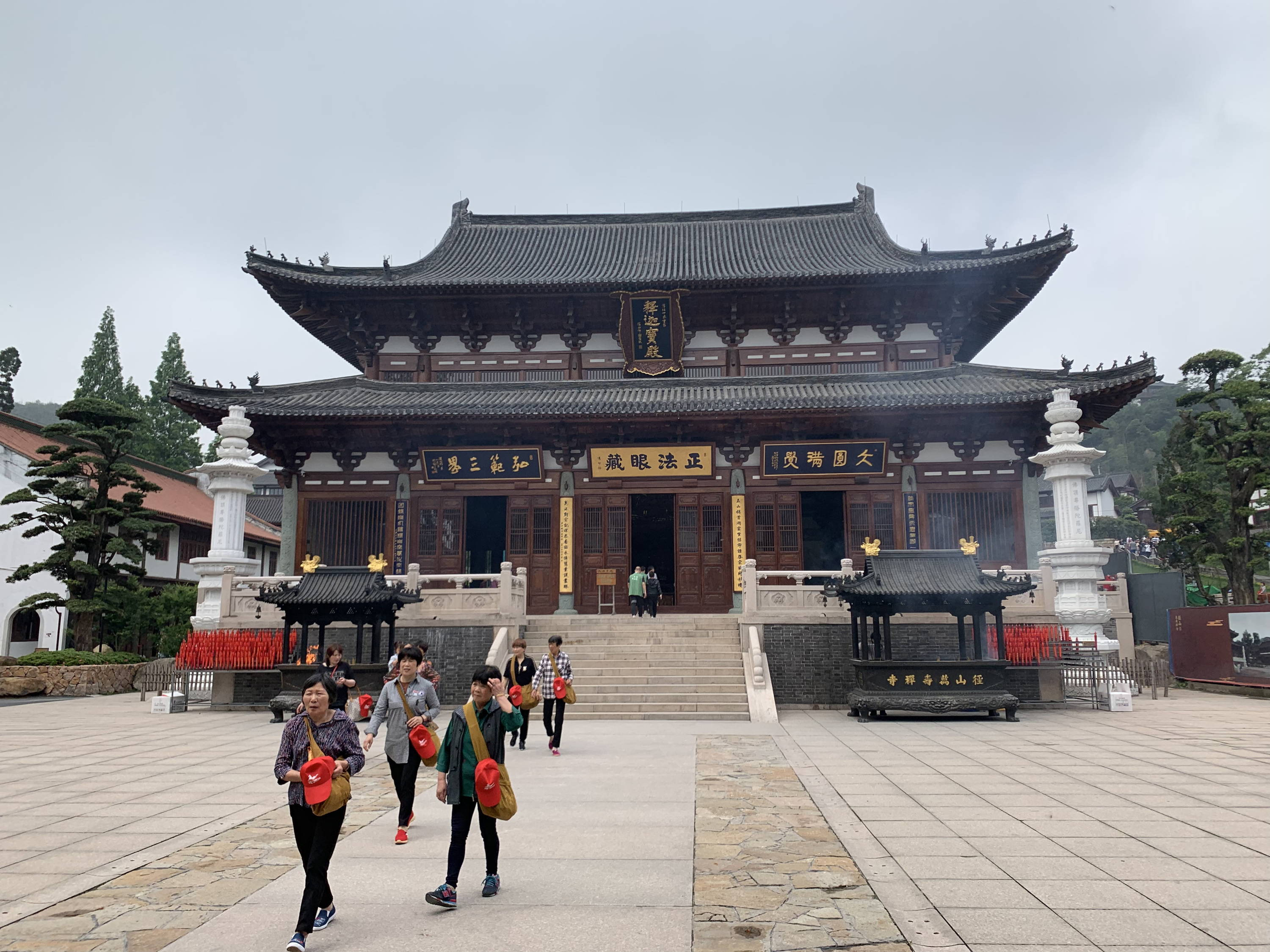 Our guide told us that the temple had been rebuilt many times over its history and workers were putting the finishing touches on the latest remodel during our tour. He said that the temple followed much of the standard layout of Chinese Buddhist temples, starting with where we stood at the entrance archway. Immediately past the archway was a wall blocking a direct view into the temple. This was designed to keep evil spirits or ghosts from entering because it was believed that these spirits were unable to turn corners (just like my old car).

Rounding the wall, we found ourselves in a large courtyard that preceded the Mountain Gate with its three entrances. Walking through the Gate’s side door, we came next to the Heavenly King Hall with its Budai or Laughing Buddha statue. Following this was an entire building dedicated to a Guanyin shrine before ending with the main hall and its three Buddha statues.

We travelled through each building quickly, as our guide wanted to show us the part of the temple that was off limits to normal tourists, mainly where the monks lived and meditated. Walking around the back of the monk’s Meditation Hall, we finally got a view of what I was hoping to see, the tea fields that produced Jing Shan Temple green tea. The field was modest in size and surrounded by a fence, which looked like an electric top was being added during the remodel. 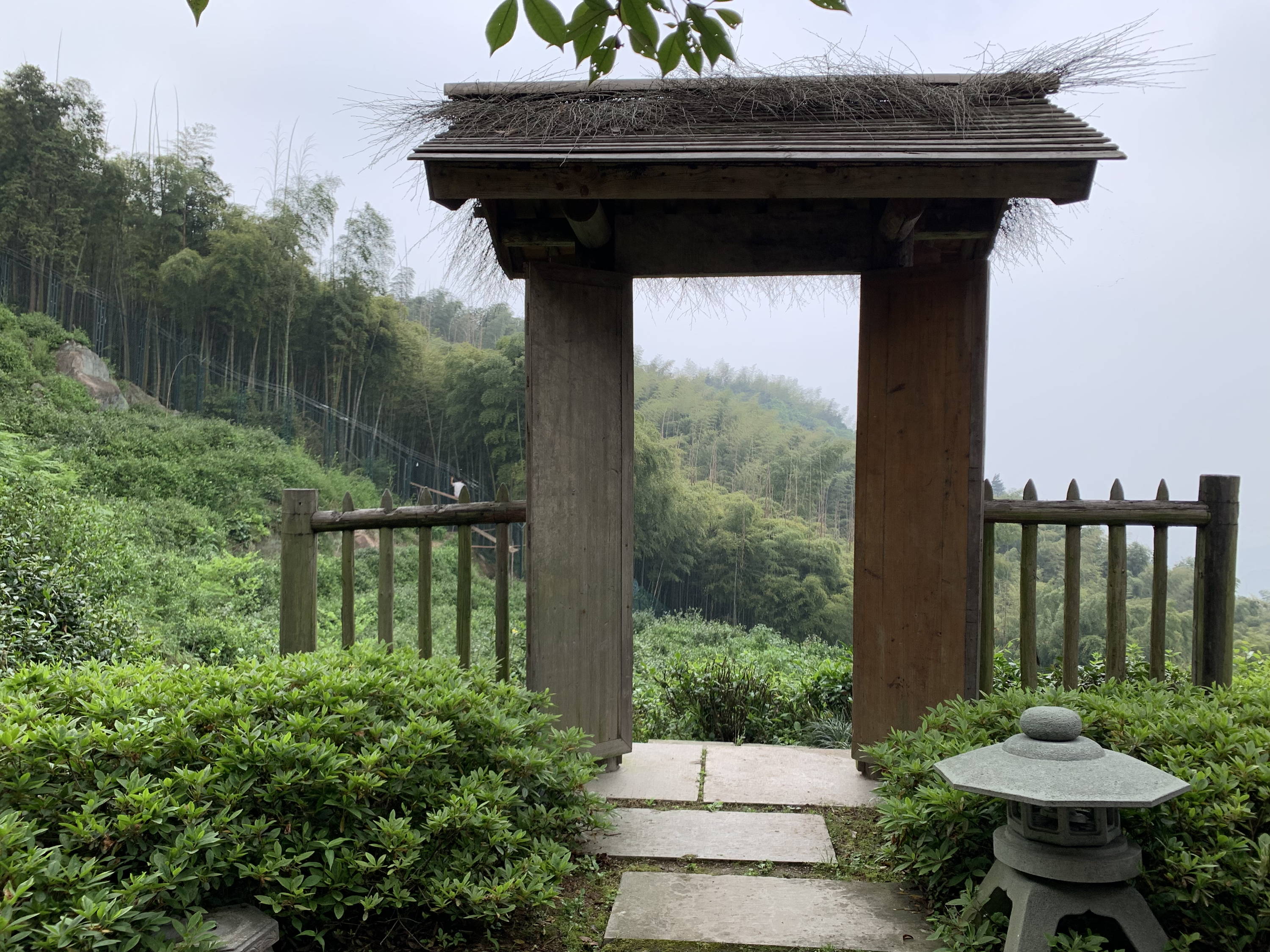 “Will,” I said pointing to the fields, “Is that fence getting electrified?”

“Ah, let me ask.” After conferring quickly with our guide, Will replied, “Yes, it was put up to prevent people from taking the tea.”

Just then our guide’s cell phone chirped. After staring at it for few moments, he informed us that the monk was now ready to have tea with us. Shepherding us down the hill back towards the gift shop, our guide paused at the entrance archway and told us he had one more thing to show us.

Heading in the opposite direction from where we entered the temple, we came to a small shrine featuring stone statues of two seated monks.

“This was meant to honor the time when a Japanese monk brought green tea back to Japan for Matcha.” Will stated.

“On the right is the teacher Wuzhun Shifan and on the left is the Japanese monk, Enni Benen.”

The excitement of possibly being on the hallowed grounds of tea’s history came to a screeching halt. 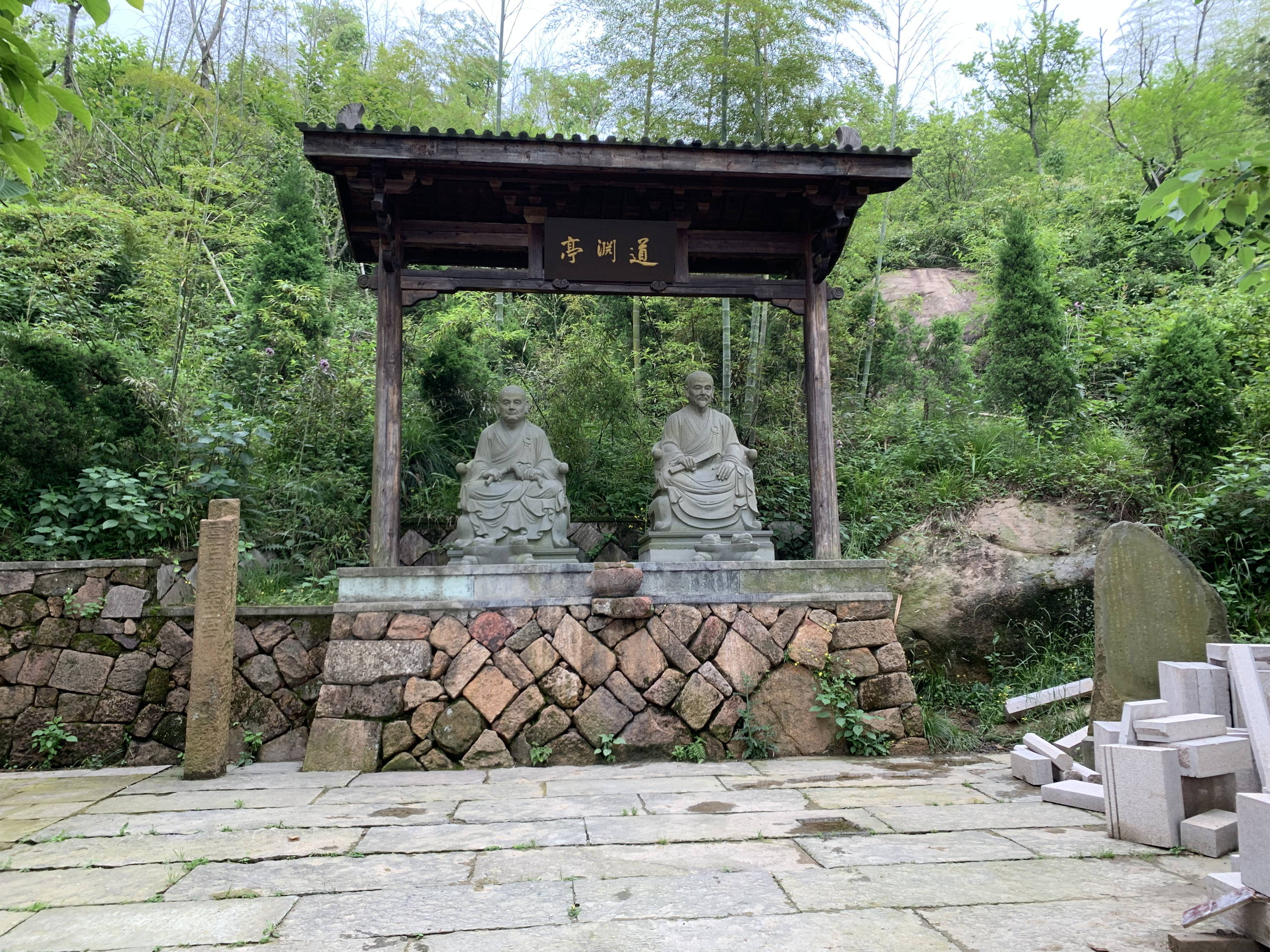 “Wait,” I asked Will. “I thought the Japanese monk’s name was Eisai?”

Will looked at me sheepishly and shrugged. “Perhaps Enni is his Chinese name?”

Since neither Will nor our guide were tea historians, this question would have to wait to be answered until I had proper access to a search engine.

Leaving the mini tea shrine, we made our way back to where we ate lunch. We ascended the stairs and were brought into a room with a long rectangular table. At the end of the table furthest from the door was an assortment of tea and teaware, just the accoutrement needed for a Chinese tea ceremony or gongfu cha.

The opportunity to drink this rare green tea from Jing Shan temple was only made more enticing by the idea that this monk, a caretaker of the tea fields would be serving us in this way.

We were seated for only a few minutes before he entered the room. Wearing light grey tunic and trousers, the monk gracefully made his way to his seat at the end of the table. With a brief glance and a slight smile, he acknowledged us. I smiled back and slightly bowed my head out of respect.

For the next few moments I stared at him, waiting for him to start the normal movements one would expect when preparing tea for people in a gong fu style.

Hmm. He’s not turning the kettle on. I thought. Maybe he’s going to serve us a better tea and waiting for that to be brought in.

As if he could read my thoughts, the monk’s gaze shifted to the room’s entrance.

I turned to see a server with a tray of tall glasses, each full of green tea leaves and near boiling water and I began to reassess my expectations.

I imagined that this was how a runner up to a game show must feel, dejected they didn’t win, but still trying to find the silver lining. Tea served by a monk now became drinking tea grandpa style with a monk. 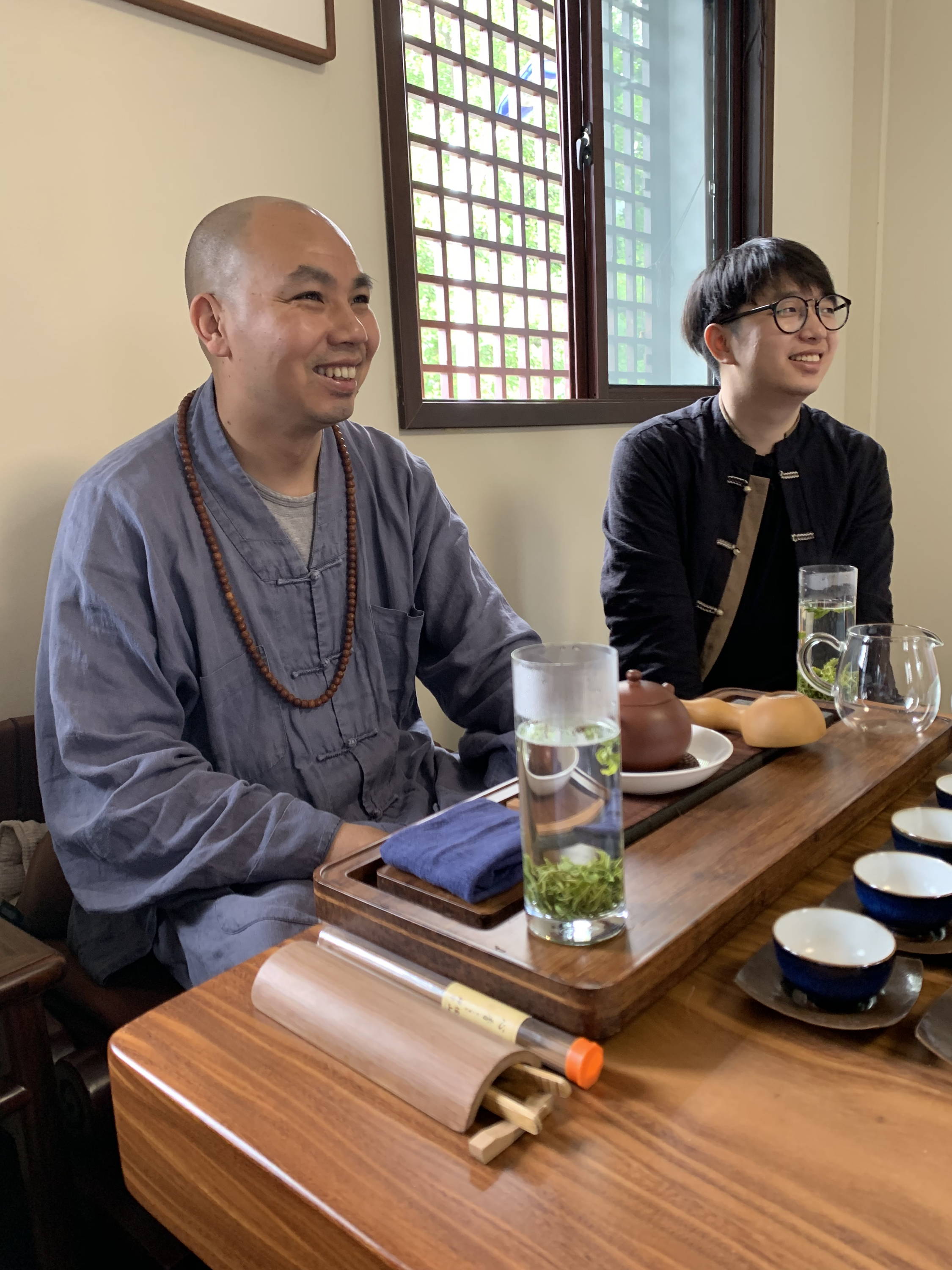 While I did get some further details about the tea made at Jing Shan, I never did get a proper answer about the tea shrine until I returned to the U.S. It turned out that Enni Benen was a monk that studied with Eisai and while not credited with bringing Matcha to Japan, it was thought that he introduced the concept of a tea ceremony to Japan, which eventually developed into chanoyu.

I also found out that the source from where Eisai took the seeds of tea plants back to Japan, that later became Matcha came from a point further north in Zhejiang Province. A visit would have to wait for another trip. Like much in modern China, you roll with the punches and find the silver lining.