We recently sat down with Balazs Henger, one of a handful of professional teamakers in the United States. Balazs is a tea and chi aficionado, a forager, a former chef, and a world-traveler who has eaten and has drunk everything under the sun. Over the course of the past decade, he’s visited tea farms all over the world, immersing himself in the craft, communities and generational knowledge. Balazs currently resides not far from Smith Teamaker Headquarters in Chehalis, Washington, where he produced Reserve Series No. 202 Northwest Alder Leaf. 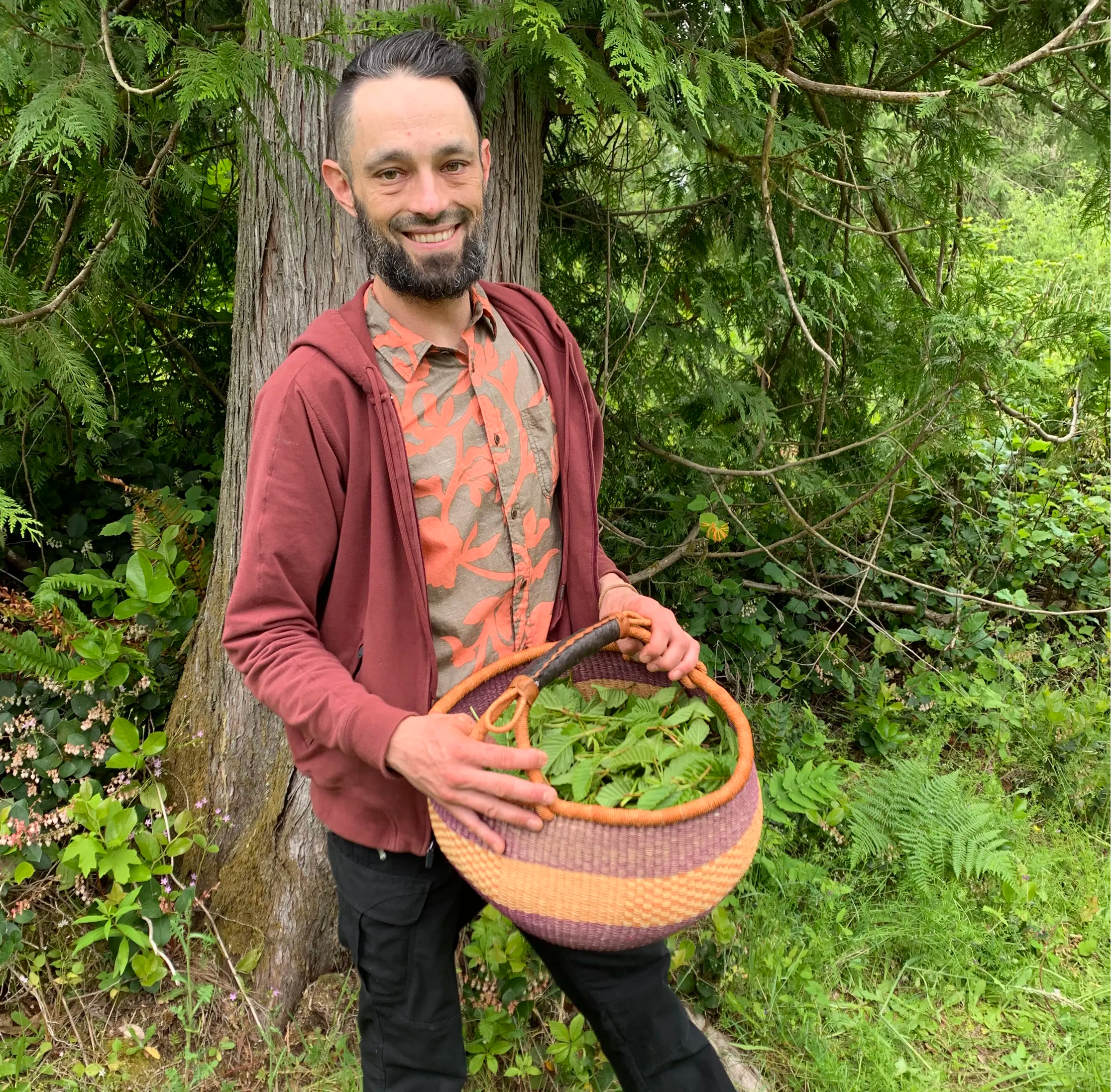 Where did you accrue experience as a teamaker?

I first got into teamaking when I went to Shanghai about 11 years ago. From there I went down to Wuyi, in Northern Fujian, where I first started processing tea leaves myself. I was handling woks and feeling temperatures and recognizing smells at different stages in the process. When I got back to the States, I wanted to hunt for tea plants because we’re at the same latitude as some tea-growing parts of China. That’s how I found Minto Island Tea Co. in Salem. They were only growing plants to sell individually, so I bugged them for about a year and then they started letting me come down to pick and process their tea leaves. I’ve been a chef for a long time, and I used to run a craft distillery. I’m really into flavors and smells and I really understand processes. I learned quickly how to improve the quality of the end product each time I processed another batch of tea leaves.

Where, besides Salem, have your tea adventures taken you?

I was just in Ha Giang, Vietnam, last Spring, working with the hill tribes. The way the rural villagers there make their green tea with a wok is very similar to how I make my tea, but the raw material they’re using is very different. They’ve got trees that are four to five hundred years old; it’s unlike anything we have in Salem. Those trees have incredibly hearty root systems and trunks. Even the new buds were almost as wide as my palm, and they’re eight to ten times the size of the buds we’re able to grow at Minto Farms. The farmer I was working with in Ha Giang was picking 2000 lbs of tea leaves per day, and processing it by the next day. What he would make on an average day, I make in 2 or 3 years in Salem. I know that eventually Minto Island Tea Co. will be able to produce a lot more tea, and we need to learn in advance how to scale up.

What are the qualities a person needs to possess to be a good tea maker?

I compare being a tea maker to working with cement. Once cement is poured, you don’t have time to do anything else except finish the process. Once the tea leaves are picked and withered, it’s go time. You can’t wait until the next day. Sometimes, when I’m processing, I’m awake from six in the morning to two in the morning, and then I’m back up at six. But I don’t get tired when I’m doing it because I’m really excited and passionate about the outcome. The tea processor can’t be lazy because the tea will show that.

The folks at Minto Island Growers know how to grow anything. They just don’t have all the machinery they need to produce tea at scale. But what they make by hand is far superior to other domestic teas I’ve tried from the U.S. They’re always experimenting with different natural fertilizers, like compost teas. Those kinds of innovative organic farming techniques enable them to reduce their carbon footprint, while achieving better results.

What was the flavor of the tea-processed Alder leaves like when you first steeped them?

While I was processing my first batch of Alder leaves, I woke up in the middle of the night and my whole house smelled like wildflowers. I couldn’t believe it, and I knew I had a mission at that point. Since the beginning, I’ve never tried just one processing technique; I’m guided by the aroma and the feel of the leaves. At this point, I use some black, oolong, and yellow tea processing techniques, but I use all of them to process each batch.

What are you excited about in the tea world right now?

This spring, I applied some of these tea processing techniques to some other herbs. There are other medicinal Northwest native plants that I’m going to try to do the same thing with next season.

I’ve been really into this twiggy pu-erh from Vietnam that I got from the hill tribes I was working with in Ha Giang. It’s dried over a wood fire so it’s got a light smokiness to it, and it has a really thick mouthfeel, more like a vegetable stock. Whenever I drink that I get transported back to Ha Giang; I’m sitting on the floor next to the fire with the other farmers. For the longest time I preferred sweet and flowery oolongs, but now I'm getting into musty, aged and savory teas. I drink a cup of the Alder leaf every day, typically in the mid afternoon when I’m done processing for the day. For me, the first tasting note is spring wildflower––it’s sweet to the point of tasting sweetened. I also like that you can steep it many times without it becoming over-extracted. For some reason, the smell reminds me of my grandmother. She was a forager, a great cook and an inspiration behind my willingness to try this experiment, and who I am as a person.